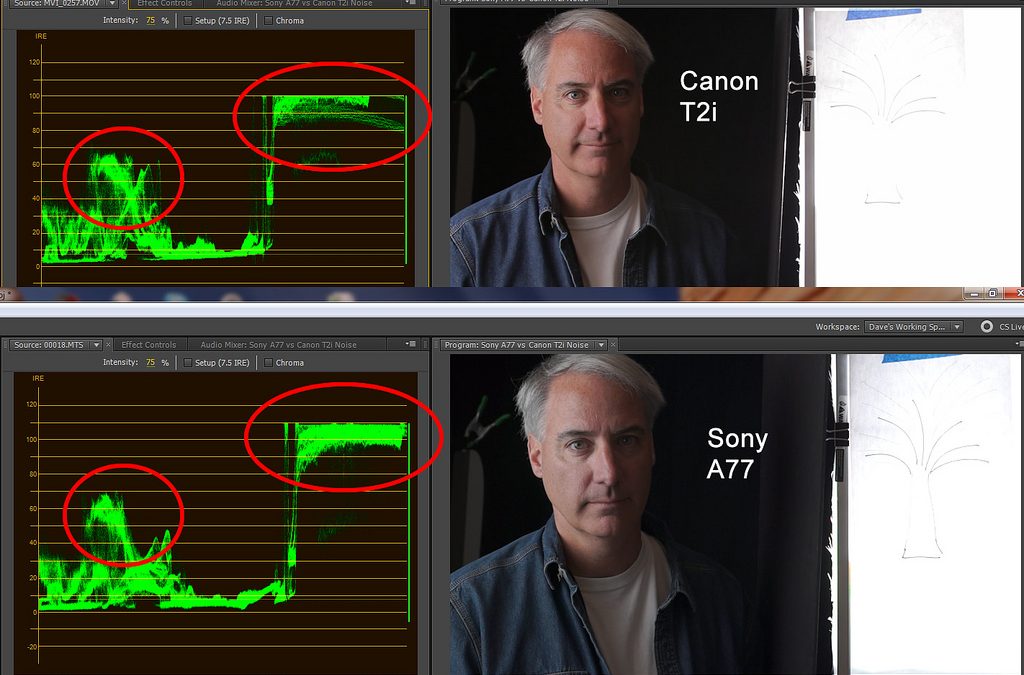 A waveform monitor is a scope that shows you the brightness or luminance of your image. It’s essentially a graph that goes from zero to 100, with zero at the bottom being pure black and 100 at the top being pure white. So, from top to bottom, this graph measures all the tones of brightness in your image, from the darkest, all the way to the brightest. Anything above this 100 IRE line, on this graph, is over exposed. Blown out.

It’s beyond 100% of the brightness level that the camera can handle, so those over exposed details are lost forever, and there ain’t much you can do to reclaim them. This is a rare case in film making where it’s actually a bad thing to be above the line. Now, this shifting mass of what looks like ecto-plasm here, is actually the wave form.

So, what this represents is a luminance value of each pixel in your image, as represented on this graph from zero IRE to 100 IRE. IRE is just the name of the units used to measure luminance and IRE stands for the Institute of Radio Engineers. So, you notice that the bunny is in the middle, we’ve got a lot of black or gray in this case off to either side. And, that luminance is represented right here on the gray and the actual bunny in the middle is represented by this white mass right there.

So, if I open up my aperture all the way right here to blow out the image, notice what happens to the wave forms. So, I’m going to go ahead and open up, when I go up waveform goes right off the top of this scale that’s telling me right away. Even if my naked eyes aren’t telling me, what the waveform is telling me is that hey, your are definitely blowing out. So, I’m going to go ahead and dial this back down, and this is the way you should really use the waveform monitor is go ahead and blow out the image and then go ahead and bring it back down. And then, you’ll know exactly what the maximum brightness is that you’re able to get with that particular image.

Now, if you’re shooting with a camera that has both, don’t confuse a waveform with a histogram. They look slightly similar, but they’re two different things. Histograms actually read from left to right, dark to bright but waveforms just to be clear. Read from dark to bright. Darkest being down at the bottom, and the brightest being up top. So, let’s go ahead and take a look at what happens on the other extreme. If we flip the script, and I want to just cover up the lens entirely. Notice that the waveform is going to go completely flatline.

So, a flatline all the way down at the bottom. Why? Because it’s telling me that hey, every single pixel that I’m capturing right now in this image is totally black and that’s exactly what that black line is indicating. Now, most of your work calls for you to actually see an image. So, we’re going to go ahead and take my hand away, and let’s take look at what happens when we bring in some other tonal images. So, right now we’re just dealing with white just to do a simple example that I wanted to show you here. But, let’s go ahead and bring some other objects in. I’m going to just widen out my shot here on my little piece of duvetyne there. We’re going to bring in a blue bunny.

Identical. That’s his little cousin. And, right here, we got an apple, so the bunnies will have something to eat, and then we got a doll so they’ll have something to play with. So, we’ll stick them all in there together. Let me just frame this shot up here. You can see a pretty even representation of the tones in this image as we move from right to left. So, the white bunny is tapping out all the way up here at the top, at the 100 RE line, just below it. So, that’s exactly where I want that. And then, notice that the blue bunny, even though this is blue and it’s a darker color, it’s actually reflecting more light because of the surface of this.

Remember, this is measuring our luminance value, so the luminance on this bunny is right here at about the midway line. A little bit above that. And, the red apple is a little bit lower. And then, our darkest object over here on the left, our little doll, is all the way down at the end. So, that’s pretty much how you would read a waveform monitor right across the board. And remember, this is an important thing to understand about this waveform monitor that I didn’t tell you guys yet so you don’t get confused when you’re out there. This is not a representation of top to bottom.

It only represents an image from left to right. That’s a little strange to understand but let me show you what I mean. If I take this object right here and raise it up, notice that it doesn’t change any in the frame as I go from the top to bottom, it’s only changing a lumen in it’s value. Same thing for this little bunny. Even though it’s down there, look, I raised it up. The bar stays pretty much there because it’s only measuring how much light is being reflected on that vertical plane. If you want to think about it that way. So, that’s a pretty clean and easy explanation of how you can use a waveform monitor to help you better judge your exposure.