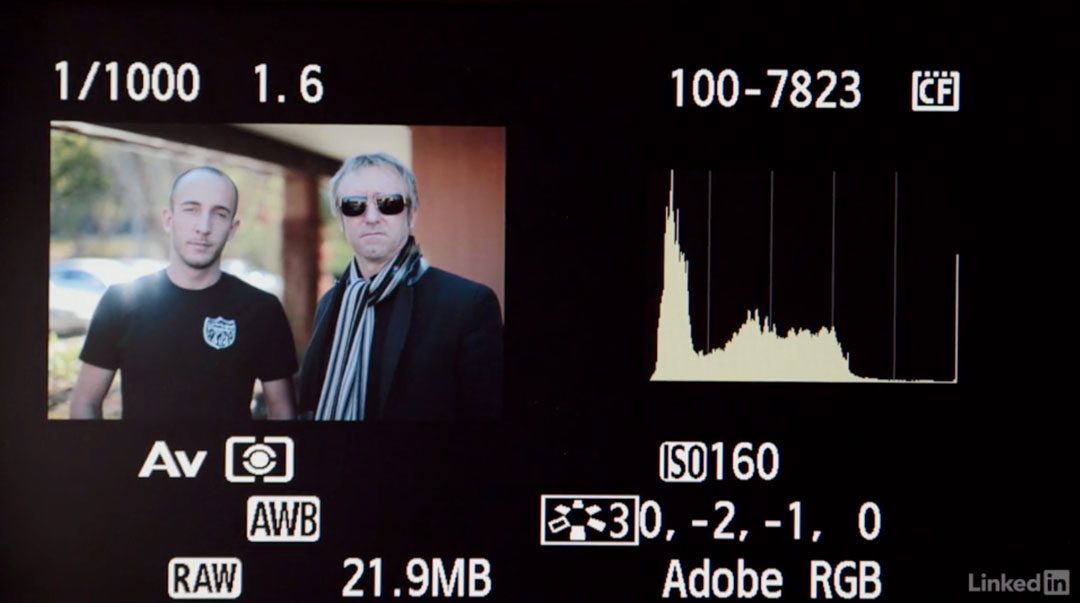 Now let’s talk about the histogram. A histogram is a tool to help you judge the brightness of your image. It’s a camera feature that you’re largely going to find in the world of DSLR photography, that’s now coming to the world of video. Histograms can be used to properly adjust your exposure and to tell if you have too many blown out highlights, or too many areas that are underexposed or too dark or whether your tones are represented as you seen them with your naked eyes. Now what a histogram does, is it plots the brightness of all the pixels in the image.

So, the left side of a histogram represents the very darkest areas of your image and the right side represents the very brightest areas of your image. So, a histogram reads from left to right, dark to bright. And it can roughly be divided in to five tonal shades. On the far left side, we have pure blacks, then between the middle section and left side, we have our shadows, in the middle we have our mid-tones, and to the right of centre, are our highlights – things reflecting off the skin. And then on the far right end, we have pure white, or the area where things can start to blow out.

So what this is showing you is an overall tonal range for your image. Now some dedicated video cameras have a live histogram that you can look at while you record, which means that you can actually view the histogram in real time as you adjust exposure. However on most DSLRs right now, they have histograms, but they don’t have a feature that lets you use the histogram and adjust it while it’s live, unless you happen to have installed the Magic Lantern third party firmware, that’s a whole other movie. So on those DSLRs, what you’re going to have to do is take a still photo once you have the image where you want, go into the playback mode, and then you can pull up the histogram feature and analyse what you’ve got, and then go back into camera mode, and adjust your image accordingly if you need to.

So that’s what we’ve done here, we took some images earlier, and we have those on the screen. So now, let’s talk about how we actually read this thing and what we’re going to be looking for. There are no 100%, hard and fast rules for what designates a proper histogram, or a proper exposure, any more than there are rules for what designates a proper brush stroke in a painting. We’re each creating unique art and only you know what you want your image to look like at the end of the day for the particular visual story you’re trying to tell. So, there are going to be exceptions to the rule, and there’s no perfect histogram I can show you.

But, I am going to show you a couple of examples on here. So you can get some idea of what they should look like in some common situations. 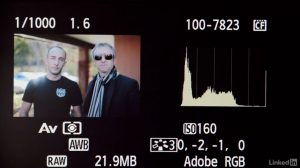 But, you’ll notice that on this histogram, we have a little bit more of a spike here on the far left side, in our black areas. Why is that? Because our subjects are wearing black shirts. He’s wearing a dark grey jacket right there, so those are naturally going to be in that area and that’s exactly where we wanted. So this is a perfectly healthy histogram for this particular image. But now let’s take a look at a blown out histogram image. 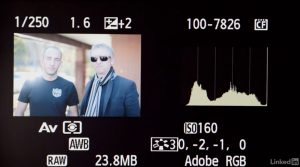 Now this over exposed shot, you’ll notice that when we go up to plus two above what the exposure was recommending, a couple of things happened here.

Everything shifts out of the black area, where it was. I’m going to show you what we had before. So here we are at our regular exposure, right? All of our blacks, we got a lot of healthy blacks in the left hand side, this looks like a nice, good exposure. But, when we get over to the right hand side, to the plus two, things start becoming from black and they start moving into the mid tones of grey. So your blacks are essentially being rendered as grey and it’s the exact type of thing that might be a little difficult to see on your LCD screen if you’re outside, but a histogram would tell you right away that hey, these guys are wearing black tops but your histogram on your camera is seeing it as grey which means that you’re going to be slightly overexposed.

So let’s take a look at what it might look like if it’s underexposed. Here’s an underexposed shot that we took right here. 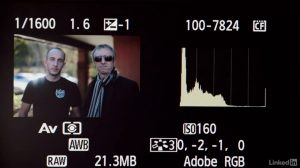 So here we are a stop under. So you can see that the faces are a little bit darker than we’d like, and we’re definitely losing details in the grey right here. And we know that we’re underexposed here because we see the entire scale shifted all the way over to the left, even though we should have some more mid tones than what we have right here in this image. So again, there’s no perfect histogram, but let’s take a look at some other examples to help you get a better idea of what might happen.

Let’s look at the extreme of under exposure and let’s look at what it might look like with the lens cap on. 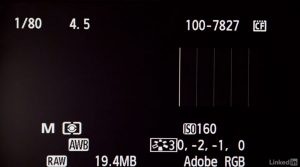 So if we pop the lens cap on, notice what happens here, we just have a single line. What that line is telling me is that the only tonal information in this image is pure black. So this is what it looks like with the lens cap on. I think you’ll be doing not too much shooting with the lens cap on, so we’re going to go ahead and take a look at some other images. Here we have a candle, so this might be a little bothersome when you first look at a histogram like this. 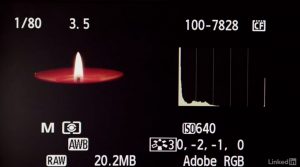 But you have to look at it in conjunction with what’s on the actual screen. And, in this case, we have a candle, so we got our white highlights represented over here on the far right. But this image is mostly made up of black. So all of that black is being represented by this single bar that we have there and our mid tones from the red candle are all seen right in the centre. Those are represented right here. This is a perfectly fine histogram for this particular subject matter. So let’s take a look at a couple of other normal shots that we might have in here, such as a landscape. If there were a perfect histogram, it would look pretty close to this. 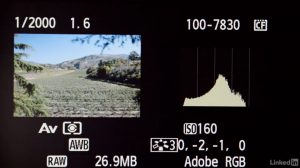 Again, as you can see, as we shift to different subject matters, people wearing different outfits, different skin tones, different lighting conditions like candlelight, histograms are going to change. But if you’re talking about landscape and outdoor stuff this is kind of the ideal that you’re looking for. You can see that we have nice blue sky up there. We preserved all of that information as well as a lot of our details in the shadows that we got right here. Perfectly healthy image, and we’ll take a look at another one. Same thing right here. We got a little palm tree going on, we got a nice smooth, even curve. 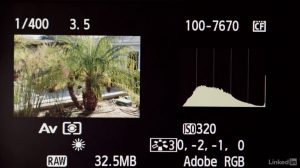 But, we got a little in spike in white right here, what is that? Is that a problem? It’s not a problem at all, there are some areas in the image that are a little bit blown out, just the reflection of the Sun off of the wall right here as well as just there on the ground. But that’s perfectly normal. So you have to analyse your histogram in conjunction with whatever it is that you have on your screen at any given time. So your eye balls are great and these tools are great. But when you put them both together, I think that’s what going to give you the best exposure judgement, or the best judgement of your exposure.

So use your naked eyes, and use these tools together, and figure out which one is best for you.